Our impression on social well-being

With a view to improving the services of the Judicial Medical Office of the District General Hospital – Negombo, NSB granted necessary resources at a function held recently.

Conducted under the theme of creating a heathy country, NSB granted 05 personal computers and miscellaneous office equipment to the Judicial Medical Office of the District General Hospital – Negombo 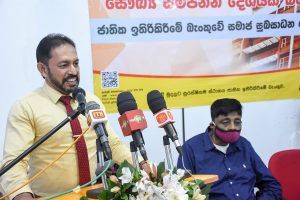 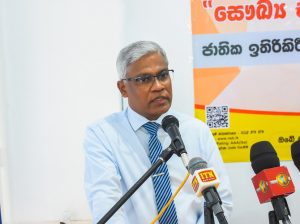 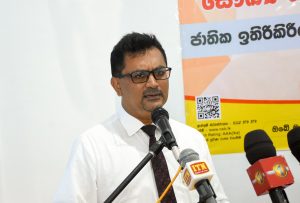 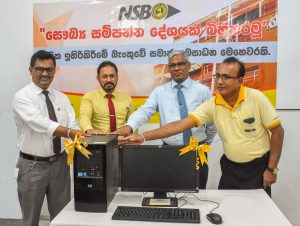 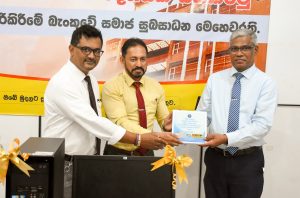 National Savings Bank (NSB) has launched a unique Creating Social Value (CSV) campaign on 8th February 2020 at the historic Attangalla Raja Maha Viharaya ushering in a new chapter to NSB’s quest to add value to the society under the auspices of its new Chairperson, Mrs. Keshila Jayawardene.

Reinforcing the current trend to raise awareness about environment sustainability and addressing the rise of Global Warming, NSB has embarked upon a drive to increase reforestation and reduce the emission of greenhouse gases. NSB kicked off this mega event by planting a Mango Sapling in the premises of the Attanagalla Raja Maha Viharaya and proceeded to distribute a variety of fruit bearing plant saplings to the devotees as well as the crowds in attendance, free of charge.

In addition, NSB in collaboration with HelpAge Sri Lanka, has conducted a Free Health Camp and a Free Vision Testing and Spectacle Donation campaign focused on the elderly as well as the low-income segments of the area. More than 450 spectacle prescriptions were completed as well as a substantial number of patients were treated at the Free Health Camp.

In keeping with its theme of “ The Closest Bank is Our Bank”, NSB has also commenced its unique “Town Storming” program where 11 teams consisting of staff of the NSB Head Office and NSB branches around Attanagalla visited residences in and around the area spearheaded in person by Mrs. Keshila Jayawardene, the Chairperson of NSB, creating awareness on common financial issues faced by the people and the means to alleviate them.

To cap it off, a programme focused especially on the senior citizens and pensioners has also been initiated under the name, “Suwabara Aruthbara Wishrama Diviyak”. Under this programme, NSB has hosted senior citizens of the area to a leisurely evening complete with seminars addressing the salient issues regarding their financial sustainability, thereby raising awareness amongst senior citizens to ensure an enjoyable retired life.

It is the objective of NSB to become the beacon light in Creating Social Value by way of unique and effective projects that add value to the society from the grass root level upward and give back to the society what was gained from it, a shining example for others. 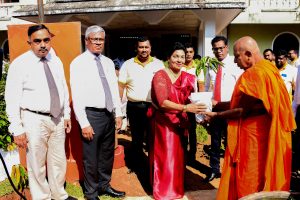 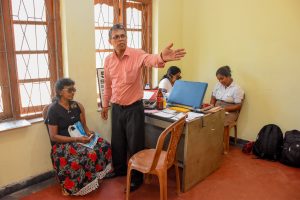 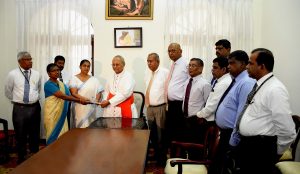 The National Savings Bank has come forward to extended its helping hand  to the victims of the recent bomb blast in some of the catholic churches of our country .

Accordingly , the National Savings Bank , on behalf of the entire staff of the Bank , offered a financial aid from the entire funds allocated for the this year’s Vesak Bhakthi Gee programme and other related activities . This donation was made to His Eminence ,  Archbishop of Colombo , Malcolm Cardinal Ranjith .

On behalf of the Bank ,  the Chairman , Mr. Jayraja Chandrasekera , GM/CEO Mr. Dhammika Nihal Perera , Presedent of the Buddist Society of the Bank Ms. Jeevani Gunasekera , President of the Christian Association of the Bank Ms. Christeen Jesudian , Mr. Lal Karunathilake , DGM ( Marketing ) , Chief Welfare Manager , Mr. Ranjith Gunathilake , and a group of official representation all the Unions also , took part on the occasion .

Commenting on this occasion , the Chairman of NSB Mr. Jayaraja Chandrasekera stated that with    regard to inter religious and inter personal co-existence , the NSB has set a classic example and it was very important to unite for a proper cause , irrespective of our Race , Religion or Party Politics . 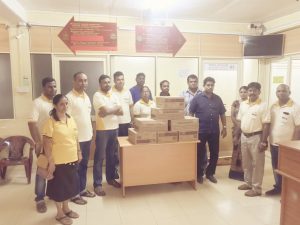 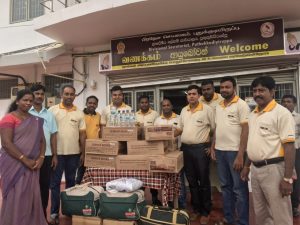 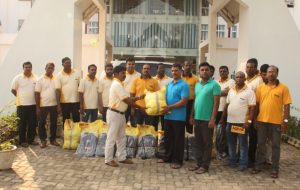 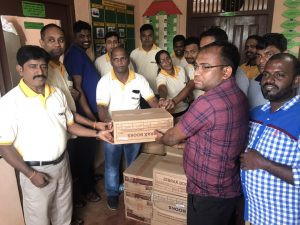 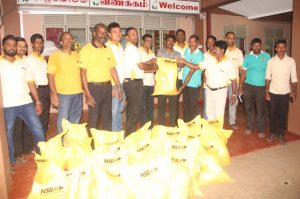 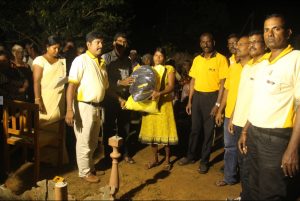 On 31st of October, in collaboration with the Department of Agriculture, Gannoruwa, certified seeds of vegetables were distributed among NSB customers under the theme of “A Beautiful Garden towards a Stronger Economy”.

Main objective of this campaign is to promote home gardening among Sri Lankans where this will be implemented as another step of NSB Agroforestry Project.

Distribution of plants in line with the commencement of transactions in the New Year, 2018

The Management of the Bank has decided to distribute plants with an economic value in line with commencing transactions in the New Year. This was implemented as another stage of “NSB Agroforestry Project” and a CSR Project of the Bank through which it is expected to distribute million plants by 2020.

Creating a new source of income for the people and encouraging them to protect the environment are the main objectives of this Project.

The “NSB CSR Mission” for flood relief in Kalutara District

The Kalutara District was severely affected by adverse weather conditions which led to flash floods. NSB with the Ministry of Education and the Ministry of Public Enterprise Development organised a flood relief mission to help those in need.

The NSB CSR Mission was directed at helping with the rebuilding process of over 50 schools and helping over 5,000 schoolchildren in the process. Under the Mission, we renovated flood-affected school buildings and distributed stationery packs consisting of 24 exercise books, eight pens, 6 pencils, three erasers, and a foot ruler. The mission also included conducting seminars for schoolchildren sitting for Grade 5 Scholarship and O/L Examinations in the Bulathsinhala, Baduraliya, and Matugama areas. The NSB branches in the affected areas provided with a list of affected schools and their recommendations were taken into consideration before undertaking the Mission.

The affected schools had to submit cost estimates for the rebuilding of infrastructure with an approval from the Zonal Educational Office.

A total of Rs. 9 Mn. collected for the programme through the contribution of Rs. 5 Mn. by the Bank and the donation of a day’s salary by the Bank’s staff of Rs. 3.8 Mn. The total cost incurred for the flood relief programme was Rs 4.2 Mn.

The remaining Rs. 4.5 Mn. is available in the CSR fund which be used for another project of national importance.

NSB recognises that elderly people need care and comfort to lead a healthy life without worries and anxiety. The International Elders’ Day was celebrated under the theme “Stepping into the future” on 1 October 2017 at the BMICH. This event was organised by the National Secretariat for Elders (NSE) along with the Ministry of Social Empowerment and Welfare. NSB was the main sponsor of the event. The event celebrated elders over the age of 100, and elderly women over the age of 75 who had given birth to more than 14 children.

This programme was held to provide scholarships for schoolchildren who were affected by the Meethotamulla landslide. The event, organised by the Urban Planning and Water Supply Ministry and sponsored by NSB and AIA insurance Sri Lanka, was held at the BMICH on 16 November 2017. Scholarships worth Rs. 25,000.00 were distributed to 107 children where NSB contribution was Rs. 1.2 Mn.

NSB distributed 3,000 gift packs among children of low-income families in Colombo. Gift packs were given to Grade 1 and pre-school students. NSB invested Rs. 2.1 Mn. for the project.

Our impression on education

The Hapan Grade 5 Scholarship seminar series is part of NSB’s initiative to support the future leaders of the country and national education. In 2017, there were 144 seminars conducted islandwide with the participation of more than 72,000 students. Participation ranged from Sinhala and Tamil medium students from around the country. The seminars are conducted by renowned educators. This year’s total investment came to Rs. 3.4 Mn. This programme has been implemented continuously since 2001.

This was a seminar series organised to assist O/L students in the districts of Kandy, Matale, and Nuwara Eliya in the Central Province covering 15 educational zones. 30 seminars were conducted. NSB contributed Rs. 2,946,400.00 to the programme.

Our impression on healthcare

At present, more than two million Sri Lankans are over the age of 60 years of which about 500,000 live below the poverty line. They have limited access to proper medical and eye care facilities. HelpAge Sri Lanka conducts Mobile Medical Camps for medically vulnerable elderly persons in rural areas and suburban areas in Sri Lanka. NSB sponsors HelpAge with financial assistance for selected programmes. HelpAge engages in various activities including medical examinations, donation of bifocal spectacles, donation of reading glasses and facilitating cataract operations.

A bus equipped with the latest medical equipment and doctors, nurses, and orderlies travel to remote parts of the island to provide healthcare to underprivileged elders. The bus includes a pharmacy, as well as a ready supply of free spectacles, and is able to treat about 150 people a day free of charge.

NSB in collaboration with the Colombo Friend-In-Need Society sponsored a mobile health camp held at Oddusudan. Over 1,500 people benefited from this camp which tested eyesight, hearing and screening for diabetes. Artificial limbs were repaired and fitted for more than 20 people. The Bank contributed Rs. 389,000.00 for the camp.