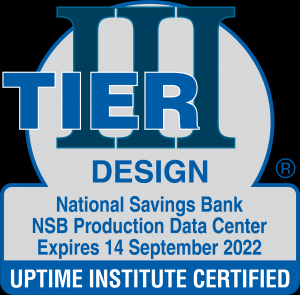 The Bank became the first bank in Sri Lanka to be awarded a TIER III Design Certification (TCDD) for its Data Centre and will soon obtain the Facility Certificate for the built facility (TCCF) from the UPTIME Institute for its state-of-the-art Data Center located in Colombo.

The Tier III Certified Data Centre is expected to significantly enhance NSB’s digital banking services by making the system available at any time to end-users as well as staff. The certification is testament to the data center’s ability to stand up to real-world challenges and reaching the many IT requirements of the Bank for years to come.

The most advanced data centres in the world are built to comply with Tier standards and the UPTIME Institute of USA has awarded this prestigious certification after rigorous inspections of the design & built facility including failure simulations.

“We are honoured to receive the TIER III certification for our data center, a first for the banking sector in the Island which was designed and built by N-able for us. The data centre is a step in the direction of increasing transaction reliability, speed and zero downtime for the bank’s day to day IT transactions,” said Mr. Ajith Peiris, General Manager/CEO of NSB.

Uptime Institute’s Tier Standard is the globally recognized standard for data center reliability and overall performance. It allows various levels of performance to be chosen based on the intended applications and business parameters associated with those applications.