Women in Management (WIM) in partnership with IFC, a member of the World Bank Group and the Government of Australia, has chosen Mrs. Keasila Jayawardena – Chairperson NSB, as the Top Professional in the Banking Sector at the “Top 50 Professional & Career Women Awards – Eleventh Edition” Sri Lanka & Maldives. The event was held at Shangri-La Colombo recently.

Mrs. Keasila Jayawardena is a well-known personality in the Banking sector with experience expanding well over a decade as the Chairperson of two Development Banks in Sri Lanka.

Mrs. Jayawardena was able to initiate several programs to improve the living standards of the rural masses by providing accessible and affordable credit facilities, which in turn will contribute to strengthen the rural economy towards eliminating poverty in the country.

Mrs. Jayawardena was appointed as the Chairperson of NSB on the 2nd January 2020, and the Bank recorded its highest ever profits and mobilization of deposits during the same year. Despite the heightened uncertainty due to the impact of the COVID-19 which has triggered a wide range of shocks in the societal and financial climates of the world, NSB’s continued focus on financial resilience enabled the entity to remain strong and achieve a solid performance under the leadership of Mrs. Keasila Jayawardena. In 2021, NSB became the 5th Most Valuable Brand in Sri Lanka and one of the Most Admired Companies as well as one of the Most Women Friendly Workplaces of the country.

Her focus lies in energizing and engaging with the communities that need economic support and upliftment. A key area for her, is empowering women entrepreneurship – an area that she has worked previously with exceptional results.

Mrs. Jayawardena is maintaining a very successful family life and is a mother of two daughters. Having overcome various challenges that life presented to her along the way, Mrs. Jayawardena has become a role model for the entire society today due to her unwavering dedication and courage.

Several VIPs, including Hon. Ministers, Members of the Parliament, Ambassadors, High Commissioners, Women leaders, past award winners, the Panel of Judges, members of the WIM including the chairperson Dr. Sulochana Sigera were present at the occasion. 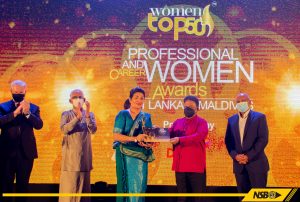 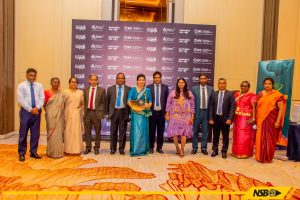 Mrs. Keasila Jayawardena – Chairperson NSB and the Board of Directors and the Senior officials of NSB at the award ceremony